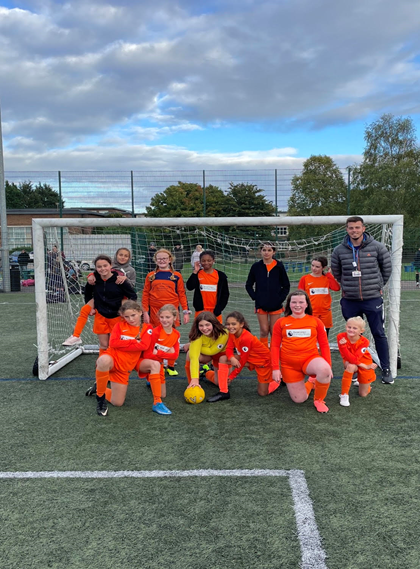 On Tuesday 27 th September our Year 5 &amp; 6 girls Football team attended a Football tournament at Charnwood College.
The girls were very excited before the event as this would be the first time the girls had
taken part in a tournament. The tournament consisted of 19 teams from 17 schools with over 200 girls taking part. Upon our arrival we learned that we would be placed in a 5 team group along with St. Pauls A, Holywell, St. Botolphs and Sacred Heart A.
Each game lasted for 10 minutes as there was 4 games to be played. Just like professional Football, winning resulted in 3 points, drawing 1 point and losing 0 points. Our first game was against St. Botolphs in a tightly contested game. You could see each team was very excited but nervous in their opening game with each team defending well and limiting chances for both teams. The game ended 0-0 which was a fair result.
Stonebow’s second game was against Holywell. After picking up 1 point in our first game, the girls were eager to go one step further and take all 3 points in the second game. Each team again defended brilliantly stopping each team from creating many chances. After pressure form Stonebow we was awarded a corner. This corner was crossed into the box and the ball was poked into the bottom corner to put Stonebow 1-0 up. Soon after the referee blew the whistle for full time and Stonebow had 4 points out of 6 in their first two games.
After having a 1 match break, we faced Sacred Heart A. After a short rest all the girls were energised and you could see it in their football. Stonebow kept the ball well and some amazing passing play calved open the Sacred Heart defence. Stonebow were 2-0 up in as many minutes. After dominating the game Stonebow created more chances. These chances led to more goals with Stonebow winning the game 5-0!
With one game left to play Stonebow had to avoid defeat to claim a top 2 spot in our group.
Our last game was played against St. Pauls A. St. Pauls came out the blocks quickly putting pressure on the Stonebow defence. After showing some brilliant resilience, our defence managed to keep out St. Pauls and blocked everything and anything towards our goal. After soaking up a lot of pressure Stonebow hit St. Pauls on the counter attack and were unlucky not to score after hitting the post. A back and forwards game after this ended 0-0 which was the right result.
After playing all our group games we had 8 points out of a possible 12 with a goal difference of +6. Once the final games were played and all the results were calculated there was a thank you from Charnwood College and praise to all the girls who took part in this brilliant event. After this the top two teams from each group were announced. The girls waited patiently but eagerly to find out where they came. With our group being announced Stonebow finished top of the group and we advanced to the quarter finals!

After the short ceremony the quarter finals were about to take place. The girls readied their selves and set up for the game. Our opponents were set up very well and you could see that this was not their first time playing together and have had experience playing as a team before. The goalkeeping, midfield and defence showed great perseverance standing strong stopping the constant waves of attacks. Stonebow created some chances but were stopped by the oppositions defence. Finally after getting through Stonebow had one chance and the ball narrowly just missed going in the goal. In the final moments of the game our opposition created one final chance with the ball ending up at their striker’s feet. Their striker excellently put the ball in the corner of the goal putting them 1-0 up. A heart-breaking goal to concede after a brilliant defensive display. Soon after the goal the full time whistle was blown and Stonebow exited the tournament at the quarter final stage.
All the girls who took part should be proud of themselves as they played amazingly
throughout the whole tournament. They had the best defensive record in the group stage as they did not concede once which is an amazing achievement in itself. After establishing a girls team and only playing two matches in their history this was the girls’ first tournament. By topping their group and getting to the quarterfinal is a massive achievement which they all should be massively proud of what they achieved.